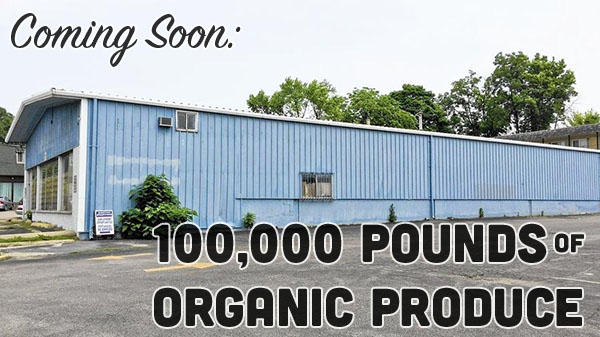 A new Aurora urban farm is an educational facility. Students will help plant, nurture, and harvest the produce, which will benefit area low-income families.

The farm is a project from local non-profit Triple Threat Mentoring. Triple Threat’s mission is, “To empower urban youth to realize their potential and inspire volunteers to leave a lasting legacy. We’re not just a youth organization. We’re an organization that facilitates relationships between youth and volunteers through our passion-based programs.” A large-scale urban teaching farm is right in line with that objective.

Related: Urban Agriculture Success Stories You May Have Missed

Not only will the farm teach at-risk kids how to grow their own food, kids in the program will learn about better nutrition. Triple Threat CEO Michael Luper told The Chicago Tribune, “The farm’s goal is also to help children and their parents better understand the importance of proper nutrition and a healthy lifestyle…we really do see the type of diet they eat…Flamin’ Hot Cheetos and Mountain Dew. What better way to teach them about healthy foods then for them to see and be part of how it’s grown?”

Right now, the 5,000 square foot warehouse that will house the farm is undergoing renovations, so that the farm can produce food year-round. The first crops they’re planning to plant are microgreens, which mature in just 10 days.

The city of Aurora is leasing the warehouse to the group for just $1 per year to help the Aurora urban farm keep overhead low. Aurora Mayor Tom Weisner explained that this project aligns perfectly with the city’s health and sustainability initiatives.  He told the Tribune, “Education and sustainability have been two important citywide initiatives during my time in office. Watching Triple Threat’s Urban Farm come to fruition is a successful blending of both.”

Alongside the microgreens this fall, the Aurora urban farm is building hydroponic and aquaponics systems. They expect to be fully up and running – meeting that 100,000 pounds goal – by summer of 2016.