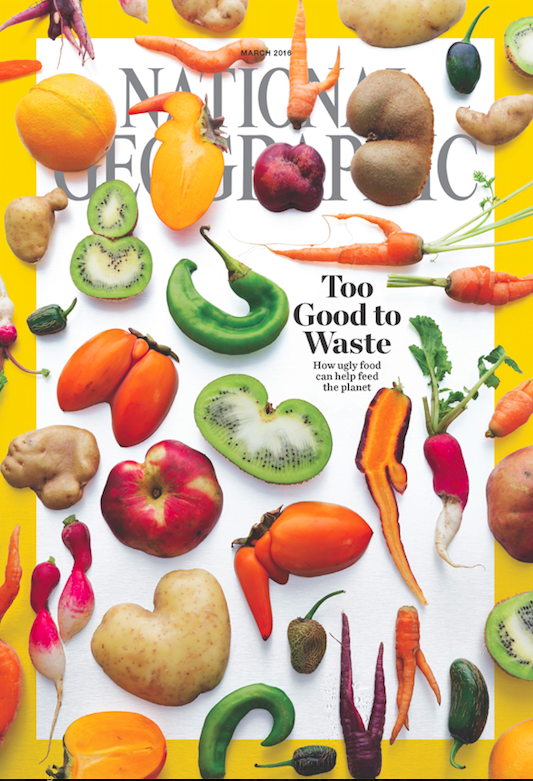 Bay Area startup, Imperfect Produce, saw the ugly veggies we throw away as absurd waste and created a business model around it.

We all know that food waste is an issue. The statistics are amazing: the NRDC estimates 40% of all food is wasted in the U.S.  It all translates into 25% of all water (11 trillion gallons annually), 31% of cropland, 30% of fertilizer, and 141 trillion calories wasted…in the United States alone.

Globally, the United Nations estimates that 51% of all fruits and veggies are wasted. And while some of the waste may be inevitable, a lot of it is perfectly edible stuff that goes straight from the farm to the dump. The reasons vary, but the principal driver of the waste is the fact that retail outlets only want to sell “perfect” looking food. Carrots that grow crookedly or pears with slight blemishes on their skin are undesirable, and despite being nutritionally and flavorfully identical to their prettier counterparts, these ‘ugly’ fruits and veggies are viewed as unsellable, which leads to a fifth of all fruits and vegetables grown on farms in the U.S. to go directly from soil to landfill.

Sustainability is all about closing loops and eliminating waste. A Bay Area based startup called Imperfect Produce saw this absurd waste, and created a business model around it. Instead of farmers having to spend money to send their perfectly nutritious food into a landfill, Imperfect lined up customers ready to eat weird looking food, and is now paying farmers for those oddball shapes and colors of fruits and veggies. Video from the Sustainability Unconference

At the latest Sustainability Unconference in San Francisco in January, Dylan Bondy, Outreach Team Lead of Imperfect Produce, gave a talk about the food waste ecosystem, and what their company is doing to fix the problem. The statistics he presented (including those above), were eye-opening to say the least: 34.7 M tons of food goes into landfills each year, making it the largest component of landfill waste. That’s right: we toss out more food than plastic (28.9 M tons), paper 24.4 M tons), metal 14.8 M tons), and wood (13.4M tons). Obviously, finding an affordable and smart solution to food waste will help extend the life of our landfills, reduce methane emissions from rotting produce, and go a long way toward reducing the amount of fossil fuels used in our agriculture sector as well as eliminating hunger.

In one of the funnier moments in this very entertaining talk, Bondy reveals the #1 complaint they get from customers, which you will mostly likely never guess. He also discusses why a scarred piece of tree fruit (apples, pears) that would normally get tossed in the trash actually have more nutrients than their more pristine cousins, and how food entrepreneurs and community members interested in sustainable food can get cheaper organic ingredients to create their products.

The company started in August 2015, and delivered 150 boxes of produce direct to consumers in its first week. By January 2017, it was delivering 5800 boxes in San Francisco Bay area per week. It has since expanded and in its first week in LA, it had over 600 delivery customers. The company offers lower costs than grocery store pricing, and also a discount for low-income people (not necessarily card-carrying EBT or SNAP, but just income qualification).

Imperfect Produce also works with processors — for instance, an organic baby food manufacturer and an organic broth company. They look for value-aligned partners, so if you know any food processors that want to create organic foods, get in touch with Imperfect to discuss some options for large quantities of produce ingredients. Imperfect also has a partnership with LA Kitchen, which brings in people in transition, getting out of prison, for instance, to give job training to help produce a finished product (a value added product) for the local market.

Most of the produce has nothing wrong and nothing dangerous in it. It is wasted mainly because it didn’t fit the right shape, size, color. Why is it not donated? According to Bondy, it’s simple economics—the cheapest, easiest thing to do for farmers is to send it to landfill, as there are no tax incentives for eliminating this food waste.

The economics work: Imperfect can provide a solution at $15 vs. $38 that a competitor might charge for similarly sized organic boxes of delivered produce. The big challenge with produce oriented companies has always been investment—given that it’s a perishable product, it’s hard to scale at a rate that investors get excited. So historically most investment, even in “slow money” type investments aimed at sustainable or healthy foods tend to go toward processed food items (think Annie’s Mac & Cheese or Silk soy milk).

However, Imperfect’s model doesn’t rely on any one particular type of produce or any one source for that produce. All farmers have ugly produce they’d like to turn from a liability into an asset. Imperfect Produce gives them a way to do it and therefore can scale quickly.