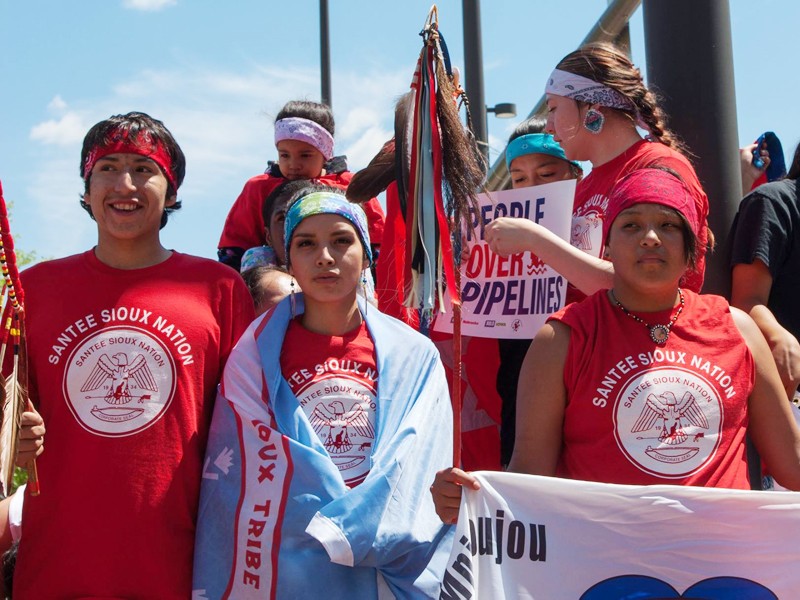 Native American protesters from across the Dakotas have united to protest the pipeline and protect their access to clean, safe drinking water. There have been 28 arrests so far. In the video above, Democracy Now’s Amy Goodman reports on the pipeline protests.

Earthjustice has filed a lawsuit on behalf of the protesters. They’re claiming that the U.S. Army Corps of Engineers violated the law when it gave the Dakota Access Pipeline the go-ahead. Earthjustice Staff Attorney Jan Hasselman said in a press release, “There have been shopping malls that have received more environmental review and Tribal consultation than this massive crude oil pipeline. Pipelines spill and leak—it’s not a matter of if, but when.”  A federal judge will be hearing arguments tomorrow.

Construction on the pipeline has stopped temporarily because the Sherriff’s office and other agencies in the area claim that protesters are creating unsafe working conditions. The protests began peacefully, but authorities are saying that the situation has escalated. However, Tribal Historic Preservation Officer for the Standing Rock Sioux Tribe., Jon Eagle Sr., disagrees.

He denied reports of weapons and pipe bombs, saying that authorities are taking social media updates out of context. Eagle told Newsy, “When we say we’re loading our pipes, that’s our chanupa. That’s a sacred object that we carry to communicate with everything within creation. It’s not a weapon.”

On top of protecting their clean water access, the protesters are trying to protect their land from being seized under eminent domain laws. Dakota Access wants to build under the Missouri River on the Standing Rock reservation. The concern is that if the pipeline leaks, it will contaminate the reservation’s only water source.

Related: How Fracking Threatens Our Water, Air, and Climate

It makes sense that the Standing Rock Sioux Tribe would be worried about a leak. The Dakota Access Pipeline – also called the Bakken Pipeline – is a project close to the scale of the Keystone XL, and a look at the Keystone XL’s leak track record is pretty grim. Waterways near these pipelines are definitely more at-risk, but the government and Dakota Access are moving ahead with construction, despite protests.

Spud Medicine Horse from the Standing Rock reservation explained, “None of our water comes from anywhere else — it’s just all from the Missouri river.”

The Sioux in North Dakota aren’t the only landowners protesting the pipeline. On Monday in Iowa, landowners filed an emergency action to stop construction. The state utilities board there will hear arguments on Thursday.